The House of the Mosque – Kader Abdolah

I don’t really know how to introduce ‘The House of the Mosque’ by Kader Abdolah. It’s not a book that I had considered reading until I popped my name into a draw for it over at Lizzy’s Literary Life, not expecting that I would win. I did and as all winners were to think of some questions to ask Kader Abdolah we needed to crack on with it. I had one of those small ‘but there is so much else I want to read’ mini-tantrums internally before picking up the book which I then couldn’t put down.

How does one describe  a book such as  ‘The House of the Mosque’ because it’s not as easy to explain as it is to read? The book really is centred on the family of Aqa Jaan who live in the house next to the mosque (and also own it) in the Iranian province of Senejan and have done for eight centuries. Based on facts around the late 1970’s and the years after, with some real historical figures thrown in the book is set over a pivotal period in Iranian history as the reign of the American backed Shah comes to an end at the hands of the Ayatollah.

I have to say from the premise I wasn’t too sure about the book, wouldn’t it be a bit too much of a political read? How on earth would I keep up with all the religious references etc? I needn’t have worried because the way that Abdolah tells this tale you learn a lot without having noticed. That for me, who had no idea of what was going on in religious or political climates – other than it’s been volatile to say the least was a sign of masterly writing.

The first half of the book introduces you to the huge family, its servants and some of the locals in a very fable like way. Some people may only appear for a chapter or two, some last the whole book before you know it you feel like one of the family. It’s then the fact that you are a fan of the family (I thought Aqa Jaan was wonderful and in some ways reminded me of Atticus Finch from To Kill A Mockingbird, you just cannot not like him and admire his passion for his family) that makes it so hard when everything changes in Iran and times of uncertainty and darkness effect the country and of course everyone in the house of the mosque.

The book is so filled with idea’s, small plots behind bigger ones, characters galore and factual truth it’s really hard to sum it up or in fact to do the book justice. Yes it’s another one of those books where to try and write anything about it leaves you frustrated that you can’t make every single person who reads this want to rush out and buy it. I jut simply have to say I think it’s a masterpiece of our times. I admit I was sceptical and yet just fell into it, was carried away buy it and couldn’t put it down. I can fully appreciate why it has been an international bestseller and translated in so many countries. It’s a book that I think everyone should read as its eye opening, though provoking and magical story telling. I can say no more than read this book, I am tempted to open the book and start all over again.

So in a sort of “ying and yang” double set of posting today I thought my second should be an opposite-ish response. So I am popping this picture up (of two bookish piles) and also a list of some books that have come through the letter box (none have broken my book buying ban, though the parcels may have broken the postman)in the last week. It’s like a tonic post after the above ‘Book Riddance’ really. As I have waffled on a lot in the other post today (which I hope you have commented on) I will keep this as a brief list of what’s come in, no waffling not that there is anything wrong with a good waffle about books… 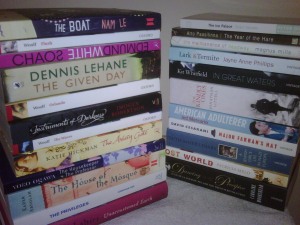 As ever let me know if you have read any of these and what you thought. Or if you have read other works of any of these authors, or indeed have heard anyone else saying things about these books? For example I know another blogger who raved about The Ice Palace and Books on the Nightstand’s Ann Kingman has been raving about Lark & Termite for some time. Over to you and yours…