And so we come to my final event at Durham Book Festival at the end of what was a wonderful, wonderful weekend. Last certainly did not mean least. In fact the final event I went to was all about Wearside Jack and actually turned out to be one of the highlight events of the whole weekend so I went out with a bang, as it were.

For those of you who don’t know anything about Wearside Jack (and even though I had Mark Blacklock’s novel I’m Jack I didn’t, I just bought it because Benjamin Myers said I must, that is how easy I can be swayed) let me explain. Wearside Jack was the nickname given to John Humble who pretended to be the Yorkshire Ripper in a number of hoaxes. Humble sent letters, taunting the authorities for failing to catch him, as well as an audio-message spoken in a Wearside accent, causing the investigation to be moved away from West Yorkshire area, home of the real killer Peter Sutcliffe, and thereby helping prolong his attacks on women and hinder his potential arrest by two years. Some 25 years after the event, a fragment from one of Humble’s envelopes was traced to him through DNA, and in 2006 Humble was sentenced to eight years in prison for perverting the course of justice. And yes, I did just steal that whole explanation from Wikipedia. But you get the gist and it sounds fascinating, grimly so, doesn’t it? 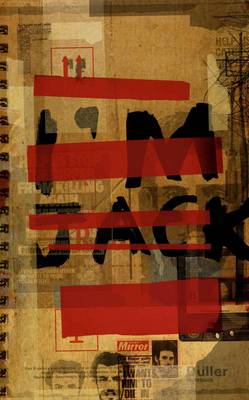 The session held up in the Burlison Gallery of the Town Hall was a rather wonderful event, especially if you love crime fiction and criminology. Mark Blacklock, who has written a fictional account of the tale of John Humble in I’m Jack, was joined by a panel of real life crime experts from Northumbria University to talk about the case. We had Professor of Criminology Mike Row, court expert Dr Michael Stockdale and law expert Adam Jackson who all talked about how the case worked, or in many ways didn’t, and how on earth someone could hoax a police force for so long – we soon learned that hoaxes are now put into an investigations frame work as oddly lots of people like to claim they have committed crimes they have nothing to do with.

It was utterly fascinating. The whole set up of the event with the fact and the fiction only made it all the more so. We heard all about the reality of how the courts worked at the time and how they work now, how evidence can be used and withheld, how a plea can change everything and how someone could completely baffle an investigation team and, horrifyingly, how that could lead to further horrendous crimes elsewhere. We also discovered how Mark went about turning history into fiction, the research he did, the sources he used and the way he brings in real and faked evidence to confuse the reader and make them wonder just what is real and what isn’t. I came away even more fascinated by criminology than I was before and, most aptly as it is what book festivals are all about, I couldn’t wait to read I’m Jack which will be my next read as soon as I have finished my rather cosy British Library Crime Classic. A brilliant finale to the festival for me to leave on, wanting more.

2 responses to “Durham Book Festival; The Story of Wearside Jack, with Mark Blacklock and Northumbria University”