I am sure that you are well aware by now that I am something of a Mitford maniac. Ever since reading their collected letters a few years ago (one of my very favourite reads) I have watched endless documentaries about them and the like and yet I read their memoirs and Nancy Mitford’s novels rather sporadically. Having been in the need of some comfort reading over the last few weeks, as well as having something of a crime fest, ‘Love in a Cold Climate’ was a book I knew I would adore and indeed did.

Technically ‘Love in a Cold Climate’ is a sequel to the wondair (those of you who love Mitford will know what I mean) ‘The Pursuit of Love’ though in many ways it runs alongside it in terms of nattaive and time scale. Told once again through the eyes of Fanny who narrated its predecessor we follow the story of the beautiful and perfect Polly Hampton from their childhood friendship, through to their ‘coming out’(no, not that sort) and onto a rather scandalous relationship that she then embarks upon. As this all goes on we are once again given an insight into the society of the 1930’s between the wars. Women’s roles are still to be somewhat submissive and the aim of a lady’s life is to find a suitable husband, it does seem odd to think that this was actually not that long ago.

It has been said, including by the authors sister Jessica Mitford who writes the introduction to my edition, that ‘Love in a Cold Climate’ was very much a rather autobiographical fictional piece. Uncle Matthew being very much like Nancy’s father and the children seeming to have all the traits of her sisters even down to the gang they called ‘The Hons’. What I love about all of Nancy’s writing (and I have also been reading the letters between her and Evelyn Waugh alongside) is her sense of humour. Some may find the setting rather twee or even irritating as she describes the naivety of the children, which soon becomes hilarious cheek and gossip, and the pompous nature of the adults in the society that Fanny and Polly frequent, I myself haven’t laughed so much at a book in quite some time.

“Well, the Lecherous Lecturer’s lecture was duchesses and, of course, one always prefers people to gates. But the fascinating thing was after the lecture he gave us a foretaste to sex. Think of the thrill! He took Linda up on the roof and did all sorts of blissful things to her; at least she could easily see how they would be blissful with anybody except the Lecturer. And I got some great sexy pinches as he passed the nursery landing when he was on his way down to dine. Do admit, Fanny.”

The characters are clearly caricatures of people Nancy knew or had met in passing, from Fanny’s mother ‘The Bolter’ who is mentioned through gossip often as a salacious lady who bolted from husband to husband, to Polly’s highly dramatic mother Lady Montdore and the wonderful if slightly disturbing Boy Dougdale also referred to as ‘The Lecherous Lecturer’. That this book is based so much on real people and how society worked in the 1930’s I find fascinating and should interest any of you who want to know more about that period in history.

Though it might not be to everyone’s taste I do urge anyone who hasn’t read Nancy Mitford to give her a try. If you like your books full of humour, crazy characters and some bittersweet moments thrown in then you simply can’t go wrong. In fact with the current craze for shows such as Downton Abbey this would be just the thing. A perfect read for when you need laughter and escapism. I loved it. 10/10

My edition, which features both ‘The Pursuit of Love’ and ‘Love in a Cold Climate’ was a wonderful edition that my friend Dom (who I speak in slight Mitford with and calls me ‘Jassy’ after the character who is really rather cheeky – cant see the resemblance can you) bought me a while back. It has been a perfect treat I’m glad I’d saved until I was feeling somewhat under the weather. 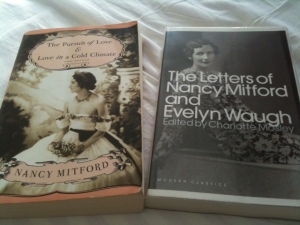 As I mentioned I have been back in the land of Mitford rather a lot of late. Alongside this I have been slowly making my way through Deborah Devonshire’s (the last surviving of the Mitford sisters) memoirs ‘Wait for Me’ and the letters between Nancy Mitford and Evelyn Waugh which make for fascinating reading and I will be reporting back on in due course. Have you read and loved anything Mitford, or are you yet to try them? If it’s the latter then you have some marvellous reading ahead, do admit!